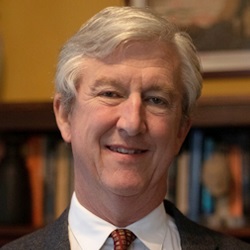 With his recent opinion piece in the Wall Street Journal (“Xi Changed My Mind About Trump", July 24), Gordon Chang joins some of China’s harshest critics who see in Donald Trump’s America First rhetoric constructive push-back against particular Chinese threats, be it market access, technology theft or regional military expansion. For Chang, Beijing’s assertiveness under Xi Jinping represents a fundamental challenge to the system of independent sovereign nation-states underpinning international relations since the Treaty of Westphalia in 1648. In this, Chang is persisting in a dangerous misinterpretation of China’s world view, not to mention misunderstanding what makes Trump tick.

He believes China aspires to global supremacy in a new system not of equal and independent sovereign states but of weak and dependent states bowing to a beneficent hegemon in Beijing. And in Chang’s view, Trump’s America First defense of sovereignty directly confronts this fundamental threat to the world order.

China does not aim to tear down the Westphalian system of sovereign states, which it has greatly benefited from in the last 40 years of breakneck growth and transformation. While Chang is right to compare Xi’s and the Communist Party’s culturally chauvinistic world view to that of imperial China, pre-revolution China wasn’t really aggressive or Imperialist in the same way as evangelizing Christian Europe and, later, America was.

Nor does Beijing seek to convert other countries or societies. It only seeks to wring whatever it values out of those relationships, be it iron ore from Australia, bauxite from Brazil, or fealty from smaller neighbors. And they bring to the table whatever they can to enhance their leverage.

This is what some policy analysts call ‘sharp’ power as opposed to the soft power that has historically characterized American influence. Soft power is what drove immigrants to these shores and it’s what until recently made people the world over admire and even hope to emulate the United States, despite its many imperfections. We are not yet seeing that kind of magnetic pull toward China and the Chinese experience, and probably never will.

Countries in China’s orbit will inevitably feel pressure and Beijing will not hesitate to use its sharp elbows to keep neighbors in line and, wherever possible, pull them out of their U.S. alliances under a kind of Chinese Monroe Doctrine. This process is ironically being accelerated by the United States itself by its withdrawal from the region.

But the proposition that an emerging regional hegemon is a fundamental threat to the Westphalian system is no more valid in the 21st Century than it was when United Fruit was picking bananas and governments in Central America in the last century. Big powers enjoy greater sovereign independence than small powers and that has been the case since the beginning of time, no less so after 1648. In fact, Trump’s America First populism is more of a response to lost hegemony than a defense of sovereignty.

While Chang is right to praise Trump for pushing China on trade, market access, intellectual property protections, and the like, it is a mistake to credit him with any higher vision. His America First stance is not a clever strategic defense of any lofty principle. Rather, it’s the product of an ugly, white nativist sentiment that Trump instinctively sensed and inflamed among a constituency perfectly distributed in America’s outdated electoral system to deliver the White House in 2016. This has nothing to do with Westphalia and everything to do with Trump’s ego, amorality and cunning.

When Deng Xiaoping launched China’s opening and market reforms in 1978, China’s rise was not inevitable. But thanks to the grit, resourcefulness and adaptability of the Chinese and the enlightened self-interest of the global powers at the time, the China he envisioned is now a reality and the world is generally better off for it.

The so-called Washington Consensus judged that economic liberalization and global integration would inevitably lead to political liberalization, which led the European and American architects of the post-War global regime to cut China much slack as its economy matured.

That consensus has so far proven wrong as the West overestimated its influence and underestimated the continuity of history in China. So while it is right to recalibrate relations with Beijing, it’s important that the American-led pluralist democratic alliance stay engaged with Beijing and not be led down the garden path by the actions of a one-term president – one hopes – who is doing some of the right things for the wrong reasons.

Strategic engagement with a rising China must include three broad components: alliances based on values and consistently backed politically, economically and militarily; reciprocity in trade and investment policy; and strong and consistent leadership in multilateral institutions.

But perhaps even more importantly at this historic juncture, successful engagement will require renewed confidence at home in the power of a pluralist, democratic politics, enriched by free markets under the rule of law, to deliver dignity and happiness to the greatest number of people.

A loss of conviction delivered Trump to the White House and threatens to undermine the soft power that pluralist democracies so effectively wielded since 1945. And only reinvigorated confidence in core values will enable democracies to constructively engage with China.

China is slowing but not collapsing

China has been in the news a bit more than usual over the last month and the news has been unnerving...